From Wikipedia, the free encyclopedia

Delhi Township (/ˈdɛlhaɪ/ DEL-hy) is one of the twelve townships of Hamilton County, Ohio, United States. The 2010 census found 29,510 people in the township.[3]

It is the only Delhi Township statewide.[4]

Delhi is also known for their appearance in the 1983 music video Electric Boogaloo.

In January 2014, Delhi was ranked as the 18th safest neighborhood in Ohio. 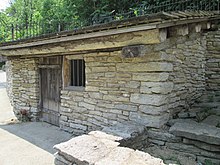 The Sedam Springhouse, which may date back to the 1790s, is one of the oldest buildings in the township.[5] Now known as the Delhi Springhouse, the structure stands on land near the stone house Colonel Cornelius Ryker Sedam built in 1796. The house no longer exists, but the springhouse has been restored. The structure protected a natural spring, which supplied water as late as 1937. The springhouse was also used to provide storage for perishable foods.[6]

Find a Home in Delhi Township

See All Neighborhoods
Courtesy of the MLS of Greater Cincinnati. Information deemed reliable but not guaranteed. Information is provided exclusively for consumers' personal, non-commercial use and may not be used for any purpose other than to identify prospective properties the consumer may be interested in purchasing. This data is up-to-date as of Sep 30, 2022 11:24:pm. The data relating to real estate for sale on this web site comes in part from the Broker Reciprocity program of the Multiple Listing Service of Greater Cincinnati. Real estate listings held by brokerage firms other than the owner of this page are marked with the Broker Reciprocity logo and detailed information about them includes the name of the listing brokers Copyright © 2022, MLS of Greater Cincinnati, Inc. All rights reserved.